Type in your account to login. Only foreigner, Korean login go

The purpose of the Incheon International Airport project was to build a hub airport in Northeast Asia that responds appropriately to surging demand for aviation and can be operated 24/7. We overcame the concerns of many people saying that it was difficult and impossible to achieve by starting the site construction plan in 1992 in Yeongjongdo, selected as the best location. That was our first step to writing the grand history of the airport construction.
On March 29, 2001 after spending 8 years and 5 months (101 months) to build the airport facilities combined with high-tech construction methods and IT systems by investing an astronomical amount of manpower and equipment as a national project, Incheon International Airport was opened with unprecedented success in the world, boosting a sense of pride among the Korean people.

Establishing status as a world-class airport in 2008

In order to enhance competitiveness and to respond to surging aviation demand with the opening of the airport as a hub airport in Northeast Asia, the phase-2 construction project began in 2002. The focus was placed on securing facilities and handling capacity that meets the standard for a global hub airport, including a 4,000-meter runway for airplanes taking off and landing, a cargo terminal, and concourse. With the completion of the phase-2 construction project in 2008, we were able to firmly establish our status as a world-class airport with scale, advanced systems and services, securing a future growth engine. 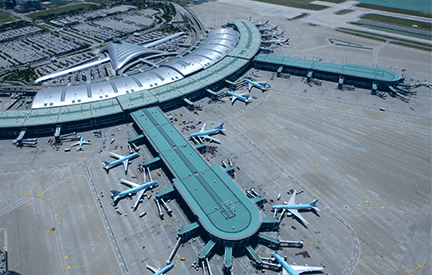 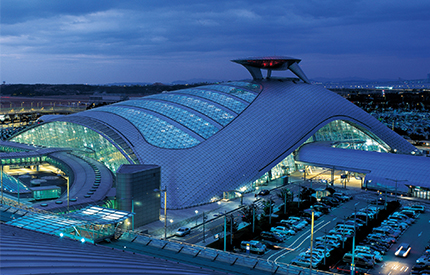 In 2018, getting ready for the second leap with the establishment of a premium airport

Despite various adverse factors after the opening, Incheon International Airport became the world's 8th largest airport in terms of international passengers and the 3rd largest in cargo handling. Grounded on a stable growth streak, the phase-3 airport construction project, which started from 2009, contains the grand will and future vision for us to make a leap into a global premium airport.
With the completion of the phase-3 construction project including the Passenger Terminal 2, Transportation Center 2, railways, roads and other access systems, Incheon International Airport emerged as a global hub airport with an annual capacity of 72 million passengers and 5 million tons of cargo handling capacity.

Direct any questions regarding information on the website to: